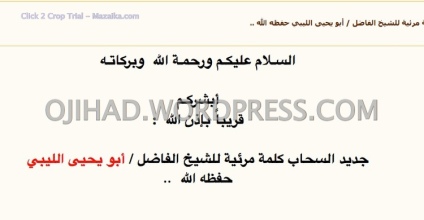 While Western media and numerous news agencies are citing U.S. intelligence sources saying a recent CIA drone strike in North Waziristan killed Al-Qaida commander Abu Yahya al-Libi, there is no word from the Jihadi side yet on wether these claims are true or not.

Yesterday there was an announcement released on several major Jihadi Internet forums indicating Abu Yahya was in fact not killed and is still roaming the mountains of the Pakistani tribal area.

Does this announcement made by a forum member mean the Al-Qaida commander survived the U.S. drone attack or was in fact never in the house that was hit by the missiles? No, it does not. In the past Online Jihadis have reacted in a similar way when a prominent Al-Qaida figure was killed. Within the intelligence community there is a saying: „First they deny it, then they mourn it, then they celebrate it, then they call for revenge“.

Question remains if the person who posted the video announcement some 17 hours ago on the forums is in fact in contact with Al-Qaida operatives or those working for the propaganda wing As-Sahab Media.

America´s spies and terrorist hunters are pretty sure they got Al-Libi this time. And even in Pakistan military and intelligence sources claim the Al-Qaida commander is dead now. Three to four Arabs and some Haqqani and Bahadur Taliban were killed in the drone strike on Khassu Khel village, Pakistani sources are saying. Likely Abu Yahya al-Libi was killed next to his Arab bodyguards and driver.

This site uses Akismet to reduce spam. Learn how your comment data is processed.