„Since 1993 my greatest wish is to blow myself up for Allah“ – the masked man says in perfect German, holding a RPG-launcher in his hands. That´s the scene that shocked Germany in January 2009 when a German national of Moroccan origin appeared for the first time in an al-Qaida propaganda tape threatening terror attacks in Germany. The German al-Qaida man was known to security officials. He was born in Morocco in 1977, came to Germany with his family in 1981 and grew up in Bonn-Tannenbusch, a neighborhood of the former German capital many immigrants moved into and created large Muslim communities.

Bekkay Harrach known as „Abu Talha the German“ graduated from school, became a German citizen in 1997 and had close contacts to those attending notorious King Fahd-Acadamy, a Saudi education centre created for the children of Arabian diplomats in Bonn. Harrach´s religious ambitions grew. He gave lectures, invited young Muslims into his apartment for prayer and talks.

In 2002 Harrach enlisted at Koblenz University to study mathematical economics and laser technology. Due to bad results he was expelled from university two years later and started to work in a callshop in the Tannenbusch neighborhood. To friends and neigbours Harrach was known as a friendly guy, always caring about looking well-dressed. Regularly he attended so-called „Islam Seminars“, Salafi events in different places in Germany, where Harrach became a popular speaker.

While he was a student in Koblenz, Harrach travelled to Palestinian Westbank in summer 2003. Near Hebron he was injured during clashes with Israeli soldiers who arrested the German national. Thanks to German authorities, Harrach was extradited to Germany after a short time. His clothes and other belongings were bloodsoaken when he returned to Germany.
In 2004 he again went on Jihad-vacation, this time to Iraq where he came in contact with terror networks and possibly fought against coalition troops.

Upon his return to Germany, Harrach travelled to Syria. Security forces arrested the suspected Jihadi terrorists when he entered the country. Bekkay Harrach was held in Syrian custody for a few weeks till German authorities again negotiated his release. Later the Jihadi thanked the German government for their help in getting him out of Israeli and Syrian prison.

Shortly after Harrach returned from Syria, German intelligence tried to recruit him as an informant of the Islamist community. Harrach refused to work for the police. He wanted to join al-Qaida and move to the Afghan-Pakistani tribal region. Meanwhile he had married a German-Polish woman named Elisabeth who had converted to Islam. She never left home without being fully covered. Harrach´s wife became pregnant but had a miscarriage. The unborn son died. His name the couple had chosen was Talha. Harrach therefore called himself „Abu Talha“ since then.

Aleem Nasir, a convicted al-Qaida supporter, recruited Harrach for al-Qaida and sent him to Pakistan in 2007. Via Iran Harrach reached the Pakistani tribal area of Waziristan and rose quickly in the hierarchy of the terror netzwork. During this time he was in touch with his family in Bonn via e-mail and phone. His wife had given birth to a son, a boy named Hamza. Both, mother and child left Germany in May 2008 for Waziristan and joined with Bekkay Harrach in Waziristan.

One year later Bekkay Harrach threatened Germany with bloody al-Qaida terror. He appeared in a German-language As-Sahab video titled „Rettungspaket für Deutschland“ and talked about how Germans can safe themselves from terror by voting for a party that would withdraw the German military from Afghanistan.

In September of 2009, just before the Parliamentary Elections, Harrach was featured again in a propaganda time, this time unmasked, dressed in a tie and suite. Slowly and confident „Abu Talha the German“ talked about how the outcome of the coming elections would effect al-Qaida´s decision to attack Germany. A few days later al-Qaida´s As-Sahab Media released two more Harrach tapes which were produced some time ago and not directly related to the terror threats.

Now Bekkay Harrach, the German who threatened Germany, is dead. A German communique released by the „Islamic Movement of Uzbekistan“ (IMU) confirms the rumors of Harrach´s death in 2010. Mounir Chouka, another German Jihadi from the city of Bonn, tells in the document that „Abu Talha“ died fighting in Afghanistan. It is reported the German-Moroccan was killed when he led a group of twenty fighters of al-Qaida, Tehrik e-Taliban and IMU in an assault on the US-Military base Bagram.

„Our friend Bekkay from Bonn, alias Abu Talha, the fierceless preacher, that threatened the whole of Germany, died in this operation the martyr´s death“, the communique reads.“ A video of the assault on Bagram will soon be released by As-Sahab Media and IMU´s media wing. Further the documents states Bekkay Harrach is „another martyrs who has written German Jihadi-History in this region, a brother whom we call a role-model to all the scholars in Germany.“

Rumors about Harrach´s death circulated in September last year. German authorities investigated reports the German al-Qaida member died in a US drone strike in Afghanistan. This information was never confirmed, neither by German officials nor by al-Qaida.

About a month after they were killed in a U.S drone attack on a compound in North Waziristan, pictures of two dead German Jihadi militants have been released.

The images show the burial of Shahad Dashti, a Hamburg resident of Iranian descent, and Bünyamin E., a 20year-old German national of Turkish origin from Wuppertal. Both Islamists had joined the „Islamic Movement of Uzbekistan“ (MU) and stayed in a building near Miranshah, when missiles fired from a unmanned drone, hit the compound on October 4th.

Shahab Dashti, who was born in Iran and fled to Germany with his parents in the early 1990s, was a regular worshipper at Hamburg´s famous Taiba Mosque. He converted from Shiism to Salafi Islam and travelled to Pakistan in March 2009 with his wife, fellow Taiba visitor Ahmad Wali Siddiqui, Siddiqui´s wife and the younger brother. 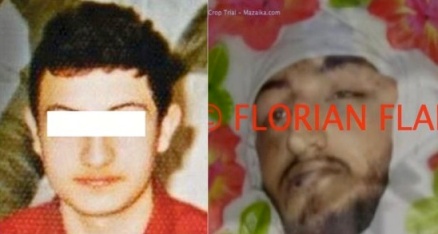 Bünyamin E. left Germany in September and somehow ended up with militants in the Pakistan-Afghan border region. His family says Bünyamin planned on visiting a relative in Pakistan to learn about Islam and study the Quran. In early October, his brother called the parents from Pakistan, telling them Bünyamin was killed in a missile strike.

According to German intelligence sources, besides Shahab Dashti and Bünyamnin E., at least one more militant from Germany died in the very same drone attack.

Naamen Meziche, who holds dual French-Algerian citizenship, was a well known figure in the Jihadi community of Hamburg. He was a friend of the 9/11 cell and was suspected of being involved in trafficking terror recruits from Europe to Iraq. Meziche´s death has not been confirmed yet by militant sources. Reports suggest he joined al-Qaeda in Waziristan and was part of the plotting circle for a upcoming series of attacks in Europe.