240 years in prison – that´s the sentence for prisoner # 03911-000 Ramzi Ahmed Yousef, the 1993 World-Trade-Center Bomber who is currently serving his lifetime prison term in Florence (Colorado).

Now a new picture of Yousef has been released to Islamist websites, where he is seen smiling into the camera, spotting a beard and a white robe. The picture was allegedly taken in April and might be a definite proof that Yousef has not converted to Christianity in prison – as some reports suggested several years ago.

Ramzi Yousef, a Kuwaiti national born in Pakistan, set off the car bomb in the parking lot of World Trade Center on February 1993 which killed six people. Yousef afterwards fled to Iraq and later to Pakistan. According to prosecuting the Islamist was involved in several terror plots including the so-called „Bojinka Plot“ to kill Pope John Paul II. and another plot to bomb U.S. commercial airliners.

He was arrested in February 1995 in Islamabad and then transferred to the U.S. where in November 1997 he was sentenced to 240 years in prison.

In addition to the new picture showing Ramzi Yousef, also a new picture of his uncle, Khalid Sheikh Mohammad, appeared on Jihadi internet forums recently. The new picture shows the 9/11 mastermind who is currently imprisoned at Guantánamo Bay (Cuba) wearing a woolen hat. 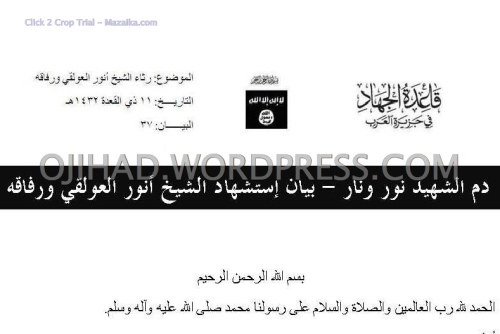 Al-Qaida the Arabian Peninsula (AQAP) has released a statement on the Internet confirming the death of US-Yemeni preacher Anwar al-Awlaki in an American airstrike in Yemen on September 30 in the region between Al-Jawf and Maarib.

The statement is titled „Blood of the Martyr is the Light and Fire – A Statement on the Martyrdom of Sheikh Anwar al-Awlaki and his comrades“ and was signed by the „Al-Qaida in the Arabian Peninsula“.

Al-Qaida writes „the Mujahid Sheikh Abu Abdelrahman Bin Nassir Anwar al-Awlaki“ as well as US citizen Samir Khan, Abu Muhsin al-Maaribi and Salim Marwani were killed in a bombing by a US aircraft.

The U.S. government never proved their allegations against Awlaki, Al-Qaida claims, instead they killed him according to their unfair laws. „Sheikh Anwar went to the Gardens of Eternity (…) and left the Ummah on the path of Jihad“, the statement further reads. America killed Awlaki „but it cannot kill an idea“. Awlaki´s blood, Al Qaida warns, will not be shed in vain.

In the last part of the martyrdom statement, the terror organizations highlights the latest events in Syria and Yemen, accusing the West of not helping the people who rose against injustice.

There is no reason to believe the martyrdom statement is not authentic. It bears all the hallmarks of an official AQAP release.

Why Oslo? – People were asking today after hearing what had happened in the Norwegian capital in the afternoon. One or more car bombs exploded in the government district of Oslo, destroying several buildings and setting the Oil Ministry on fire.At least seven people died when the bombs exploded. Prime Minister Stoltenberg escaped the attacks unharmed.

Only a short time later, on the Norwegian Island of Utöya, a gunman opened fire at a Youth camp of the ruling Labour Party of Norway – killing at least ten teenagers 15-16 years old. Norwegian Prime Minister planned to visit the Utöya camp today, he might have been the prime target.

The shooter was arrested by Special Forces Police and is now in police custody. According to Norwegian media reports the man was identified as a 32 year-old Norwegian national by the name of Anders B. of Oslo.

Mr.B. describes himself as a conservative Christian, interested in Classical Music, World of Warcraft, Hunting and politics.

From what is known to this moment, the Oslo Bombings do not seem to be the work of Jihadi terrorists but rather a single nationalist terrorist acting in protest against the ruling government. If confirmed this could turn out to be „Norway´s Timothy McVeigh“.