The Horrors Of War 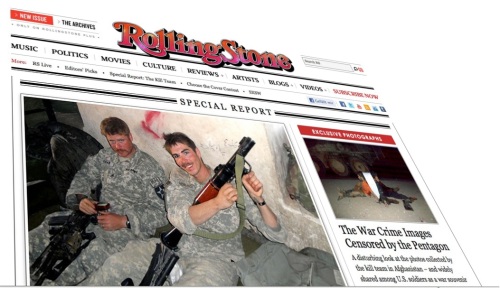 „I want the American people to know that the US troops are oppressing our youths and elders before their kids and wives. If there is any conscience left in the West, it should be awakened“ – Afghan President Hamid Karzai said on Wednesday.

What he was referring to, is a story coming from Afghanistan, a story about unit of US soldiers stationed in Kandahar Province who formed a „Kill Team“, hunting down Afghan civilians, killing innocent people for fun, cutting of their fingers as trophies and posing with dead bodies, smiling for pictures.

All this took place last year and was made public because some of those American servicemen involved were speaking, telling their families back home what their comrades had done to the Afghan people.

Last week, German newspaper DER SPIEGEL published the story of the Bravo Company´s 5th Stryker Brigade, telling the background of the soldiers who went to war and turned into murderers. The magazine said in a worldwide investigation they had obtained 4,000 pictures and video files the US military had confiscated and kept under wraps since then. The criminal investigation in the USA had already started – but the private images taken by the soldiers were never shown to the public because the Pentagon claimed they could cause violent protest and possibly even terrorist attacks because of the nature of those graphic pictures.

US-Magazine „The Rolling Stone“ now presents a detailed account of the killings of Bravo Company, publishing even more pictures and videos showing the killing of Afghan civilians and Taliban fighters by the American soldiers. It is an extraordinary piece journalistic work, a story of a crime that – in the long-term – will have the same impact on the US-led wars in Afghanistan, Iraq and elsewhere as the Abu Ghraib torture images.

Is a person insane by birth or turned into a monster later in life? Foreign Policy Magazine takes a look at Libya´s leader Colonel Muammar al-Gaddafi and his family and presents a picture gallery showing old images of the dictator and his family clan – a family that fights and stays together like no other ruling family of North Africa.

The Afghan Taliban claim to have captured a Canadian national in Southern Afghanistan, accusing him of being a „spy“. The 29 year-old man allegedly named Colin Rutherford is said to be resident of Toronto and was kidnapped by the Taliban insurgents in Ghazni Province, the Islamists claim.

According to the Taliban they have obtained documents and photographs which proof the Canadian was on a spying mission. A Taliban Spokesman said, those holding the Canadian have been contacted by Canadian officials, talks about the release of the accused spy were not successful yet. A video of the kidnapped man will be released soon, the Taliban states.

Even if there is no proof of the kidnapping claim, there are credible reports of a Canadian citizen who went missing in Ghazni several weeks ago. One of the sources of this information is allegedly the governor of Ghazni himself.

Meanwhile the Canadian government confirmed a Canadian citizen went missing in Afghanistan. Mr.Rutherford was travelling the country as a tourist. A recent graduate of University of Toronto, the 29-year old Canadian has traveled to the region a few times. In 2009 he traveled to Pakistan, stayed in Islamabad for three weeks and then traveled to the Kashmir region. Rutherford allegedly also traveled to Kabul, Afghanistan, October – November 2010.