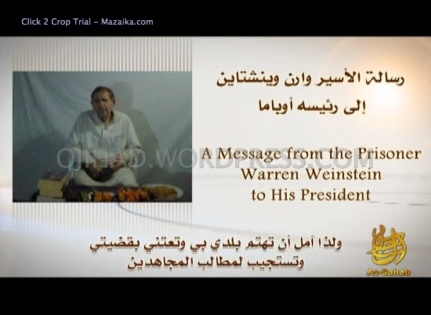 Ever since Al-Qaida´s leader Dr.Ayman az-Zawahiri has claimed responsibility for holding an American citizen hostage in December 2011, experts and intelligence officials have been debating wether or not Al-Qaida´s claim was in fact true. Is the American director for „J.E. Austin Associates“ in Pakistan, Warren Weinstein, who has kidnapped in Lahore (Pakistan) in August 2011 really held by Al-Qaida?

On Monday the terror network´s media outlet „As-Sahab“ has released a video message by Weinstein, in which he urges the US government to fulfill the demands of Al-Qaida for his release.

„I would like to talk to President Obama and ask him and beg him to accept and respond to the demands of the Mujahidin“, Weinstein says in the video sitting at a table with food and books on it, „My life is in your hands Mr President. If you don´t accept the demands, then I die. It is important that you accept the demands.“

Pakistani sources have claimed Weinstein, who hails from Rockville (Maryland) was abducted from his home in Lahore by armed gunmen belonging to terrorist group „Lashkar e-Jhangvi“. The American was then allegedly transferred to the tribal region of North Waziristan and probably handed over to the Tehrik e-Taliban (TTP), a group known to cooperate with Al-Qaida.

In the now released hostage´s video message no demands are given though it is known from Zawahiri´s claim of responsibility for the kidnapping that Al-Qaida wants all of its members held by the US to be released and demands an end to US airstrike and drone attacks in Muslim countries.

Two days ago a unusual video emerged on Jihadi Internet forums – an American terrorist bases in Somalia fearing for his life threatened by former comrades. “To whom ever it may reach from the Muslims”, Hammami says in the new video message, “I record this message today because I feel my life is in danger by the Harakat Al-Shabaab al-Muhajidin due to some differences that occurred between us regarding the Shariah and the strategy.”

(by the way: the video message seems to have been recorded in the same location Omar Hammami was posing in for some picture he took several weeks ago with a fellow American Jihadist Cabdulaahi Ahmed Faarax from Minneapolis – see picture above)

Omar Hammami, born and raised in the U.S., immigrated to Somalia in 2006 and since then acted as the fighters „Abu Mansoor al-Amrikki“ with the Islamist movement „Harakat Al-Shabaab Al-Mujahidin“ (HSM). Hammami was featured in a number of propaganda tapes coming from Somalia urging fellow Muslims in the U.S. to join the Jihad and travel to East Africa. Several young Somali men from the Minneapolis area followed to American Jihadist´s calls and made their way to Somalia.

Why is Omar Hammami who is wanted by the U.S. as an international terrorist, now fearing fellow Islamists could hunt him down and kill him? From what is known about the current situation in Somalia, foreign militants – especially Westerners – are increasingly suspected of being spies by Al-Shabaab. Since foreign fighters from the U.S., Canada, Europe and the Middle East are rushing to Somalia to join the Jihad the number of American drone strikes rose too. And according to some African media reports, there is a division within Al-Shabaab over the question of the foreign Al-Qaida militants.

Numerous militants including Al-Qaida operatives were killed by the CIA drone attacks in the past months. Al-Shabaab therefore reacted nervously, investigating the background information of foreigner coming to join their ranks. According to European intelligence sources some foreign Jihadis have even been executed by Al-Shabaab as alleged spies. Among these victims of the spy-hunt were North Africans, Kenyans and a Somali man from Europe.

Meanwhile Al-Shabaab released a statement about Hammami´s video message and denied the American was in danger of being killed. „Al-Shabaab was surprised about the video attributed to the Brother Abu Mansoor al-Amrikki, which was published on the Internet, and states that the brother Abu Mansoor is afraid that “his life threatened by Al-Mujahidin” according to the published video“, the statement reads.

Further the Somali Jihadi group declares: „Until the investigations are complete about the meaning and motives of this video, Al-Shabaab underscores that everything stated in this video is not true at all, and life of the brother is not threatened by Al-Shabaab.“

So why has Omar Hammami released the disturbing video message that is now causing debate among Online Jihadis?

It is possible that the differences Hammami is talking might be due to his opinion on how Al-Shabaab should expand its Jihad. The more radial elements within the group are promoting the idea to take the fight to neighboring countries like Kenya and Ethiopia. Possible Hammami opposed these plans.

„Bloodshed“ is the daily news coming out of Syria these days. While the protest against the regime of President Assad have turned into a full grown war with a militant insurgency fighting the dictator in Damascus, Al-Qaida sees its chance for establishing a base in the country and calls for Syrians and other Arabs to join the fight against Assad.

„Do not rely on the West or America or the Arab governments and Turkey“ Zawahiri says in the new video tape, „You know what they are planning against you!“

„People of Syria do not depend on the Arab League the corrupt governments which are supporting it, the Al-Qaida leader continues, „If we want freedom we must be liberated from this regime. If we want justice we must take revenge on this regime.“

Zawahiri continues saying Mujahidin from Turkey, Iraq and other places should join the Syrian resistance in their fight against the ruling regime.

It is the Al-Qaida leader´s second message to the Syrian people. The first one was released by the Al-Qaida media wing „As-Sahab“ in July 2011. In that video tape Zawahiri claimed US-President Obama was planning on replacing Assad with another Pro-American ruler in Damascus.

„You are an example, explaining lessons to your Arab and Muslim nation in sacrifice, steadfastness and the struggle against oppression“, Zawahri said in the July 2011 tape to the Syrian people, „How could you not? You are the sons of the Levant, the front for Jihad and martyrdom.“