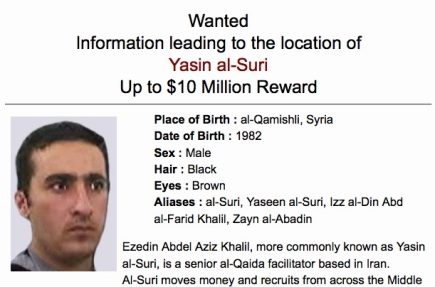 Izzaddin Abdel Aziz Khalil from the Syrian town of Al-Qamishli is now international terrorist celebrity. The 29 year-old Syrian has been added to the U.S. Most Wanted List of terrorists. A $ 10 Million reward is offered for information leading to his killing or arrest.

Khalil who is known as „Yassin al-Suri“ is labeled as a senior Al-Qaida facilitator based in Iran. According to U.S. authorities Al-Suri is moving terrorist recruits across the Middle East into Iran and then to Pakistan and Afghanistan. His activities are known to Iranian authorities, the U.S. claims.

„Iranian authorities maintain a relationship with al-Suri and have permitted him to operate within Iran´s borders since 2005“ – the U.S. Ministry of Justice states – „Al-Suri funnels significant funds via Iran for onward passage to al-Qaida´s leadership in Afghanistan and Iraq“.

Yassin al-Suri was also responsible for arranging a deal with Iran´s regime for the release of imprisones Al-Qaida members (among them Egyptian Saif al-Adel and Kuwaiti Sulaiman Abu Ghaith) from Iranian prisons. Allegedly Iranian officials handed the prisoners to Al-Suri who then facilitated their travel to Pakistan.

Meanwhile Iran has denied having any affiliation with the Al-Qaida opertive Yassin al-Suri. „These amateurish scenarios by the U.S. government on the presence of an Al-Qaida member in Iran are totally baseless“, Foreign Ministry spokesman Ramin Mehmanparast said. 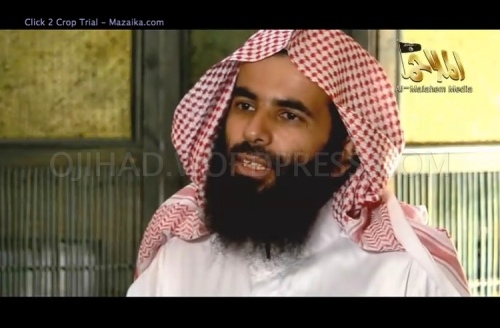 O sea, give me news of my loved ones.

Were it not for the chains of the faithless, I would have dived into you,
And reached my beloved family, or perished in your arms.

Your beaches are sadness, captivity, pain, and injustice.
Your bitterness eats away at my patience.

Your calm is like death, your sweeping waves are strange.
The silence that rises up from you holds treachery in its fold.

Your stillness will kill the captain if it persists,
And the navigator will drown in your waves.

If the wind enrages you, your injustice is obvious.
If the wind silences you, there is just the ebb and flow.

O sea, do our chains offend you?
It is only under compulsion that we daily come and go.

Do you know our sins?
Do you understand we were cast into this gloom?

O sea, you taunt us in our captivity.
You have colluded with our enemies and you cruelly guard us.

Don’t the rocks tell you of the crimes committed in their midst?
Doesn’t Cuba, the vanquished, translate its stories for you?

You have been beside us for three years, and what have you gained?
Boats of poetry on the sea; a buried flame in a burning heart.

The poet’s words are the font of our power;
His verse is the salve for our pained hearts.

This poem was written by a former Guantánamo Bay prisoner No.192 named Ibrahim Sulaiman Mohammad al-Rubaish who is now acting as a spiritual leader within the terrorist network of Al-Qaida in Yemen. The 32 year-old Saudi had been captured at the Pakistan-Afghanistan border in late 2001 shortly after the battle of Tora Bora. He allegedly was an Al-Qaida fighter back then who was trained at Al-Qaida´s Al-Farooq camp in Afghanistan.

Al-Rubaish was sent to the U.S. detention center at Guantánamo Bay and held there till he was transferred back to his home country of Saudi-Arabia on December 13 2006. Born in the conservative region of Buridah in 1980, Ibrahim al-Rubaish graduated from the Imam Mohammad Bin Saud University in Shariah law before he went to Afghanistan and joined Al-Qaida.

In Saudi-Arabia al-Rubaish entered the rehabilitation program for Jihadi militants created by the Saudi interior ministry. Before he finished the program, Al-Rubaish disappeared in Spring 2008. He traveled to Yemen and along with 11 other former Saudi Guantánamo prisoners joined Al-Qaida in the Arabian Peninsula (AQAP) leaving behind his wife and three children. Shortly after his disappearance Al-Rubaish´s name appeared on the „85 Most Wanted“ list of terrorists wanted by the Saudi authorities.

For the first time Al-Qaida in Yemen presented the former Guantánamo prisoner as a high-ranking Jihadi leader by releasing a audio tape titled „Why Mohammad Bin Nayif?“ in which he justified the assassination attempt on the Saudi interior minister and member of the royal family, Prince Mohammed Bin Nayif carried out by an Al-Qaida suicide bomber in September 2009.

Several other audio messages by Al-Rubaish followed since then, all of them dealing mainly with religious and Shariah based topics. Within a few years the former Guantánamo inmate rose to the ranks of a prominent religious ideologue and spiritual leader of Al-Qaida in the Arabian Peninsula (AQAP).

For the first time Ibrahim al-Rubaish appears in the latest propaganda tape released by AQAP – „One Ummah“.

240 years in prison – that´s the sentence for prisoner # 03911-000 Ramzi Ahmed Yousef, the 1993 World-Trade-Center Bomber who is currently serving his lifetime prison term in Florence (Colorado).

Now a new picture of Yousef has been released to Islamist websites, where he is seen smiling into the camera, spotting a beard and a white robe. The picture was allegedly taken in April and might be a definite proof that Yousef has not converted to Christianity in prison – as some reports suggested several years ago.

Ramzi Yousef, a Kuwaiti national born in Pakistan, set off the car bomb in the parking lot of World Trade Center on February 1993 which killed six people. Yousef afterwards fled to Iraq and later to Pakistan. According to prosecuting the Islamist was involved in several terror plots including the so-called „Bojinka Plot“ to kill Pope John Paul II. and another plot to bomb U.S. commercial airliners.

He was arrested in February 1995 in Islamabad and then transferred to the U.S. where in November 1997 he was sentenced to 240 years in prison.

In addition to the new picture showing Ramzi Yousef, also a new picture of his uncle, Khalid Sheikh Mohammad, appeared on Jihadi internet forums recently. The new picture shows the 9/11 mastermind who is currently imprisoned at Guantánamo Bay (Cuba) wearing a woolen hat.