Omar Hammami is the American face of the Somali Jihad. He was featured in various propaganda videos from the region and called other Americans to join the Islamist Al-Shabaab Al-Mujahidin Movement. Now rumors of his death are spreading after the latest government military offensive against Al-Shabaab. 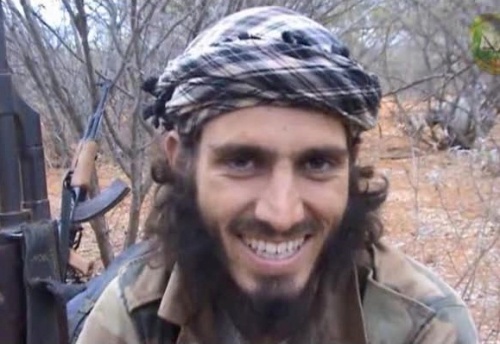 Charismatic militants, Western Jihadis who left the safety of their homeland to fight alongside Islamist groups, are by far the most powerful recruiting tool of al-Qaida today. Especially American citizens, born and raised in a country whom the terrorist have declared their main enemy, are used by al-Qaida to promote propaganda and regional conflicts.

One of those recruiting and propaganda tools is Omar Hammami of Daphne, Alabamda. The 26 year-old American citizen, a son of a Syrian father and an American Christian mother, is the American face of the Jihad in Somalia. Hammami became a fundamentalist Salafi Muslim in college and dropped out of school later. In 2004 he moved to Canada and married a Canadian Somali woman. The following year, in June 2005, the couple moved to Egypt and settled first in Alexandria, then in Cairo, where their daughter was born. Hammami told is parents he wants to study at Cairo´s Al-Azhar University.

In November 2006 Hammami traveled from Egypt to Somalia to visit members of his wife´s family. According to his father, Omar Hammami´s passport was stolen and he then stranded in Somalia. Eventually he stayed in the country and somehow joined the militant Al-Shabaab Movement in their fight against Ethiopian troops who had invaded Somalia back then. Al-Jazeera interviewed the American Jihadi in October 2007 in the Somali bush. Hammami was dressed in a military uniform, hiding his face under a scraf wrapped around his head. He called himself „Abu Mansour the American“.

Al-Shabaab – which allied itself with al-Qaida by swearing the oath to Osama Bin Laden – began using the White American Jihadi for propaganda means and even produced a video featuring mainly Omar Hammami in Spring 2009. „The only reason we are staying here, away from our families, away from the cities, away from candy bars…all these other things is because we are waiting to meet with the enemy“, Hammami said in the propaganda tape in which he also presents an English rap song about Jihad.

„From Somalia and Shishan (Chechnya), from Iraq and Afghanistan, gonna meet up in the Holy Lands, establishing Allah’s Law on the land“ – the American Jihadi sung. Martyrdom, Hammami said in the refrain, was his greatest wish.

According to the 2009 propaganda tape, „Abu Mansour al-Amrikki“ took part in several ambushes on Ethiopian and African Union (AU) troops in Southern Somalia. The last time Omar Hammami appeared in a Al-Shabaab video – giving a speech during a children´s Quran recitation contest in Somalia – was in April 2010. Since then, no word has been spread about the whereabouts of the American Al-Shabaab fighter.

Somali Defense Minister Abdihakim Mohamud Haji Fiqi told news agencies last week, he got intelligence reports stating Hammami was killed or severely injured in a recent government troops´offensive against Al-Shabaab in and around Mogadishu. Their was no 100 percent confirmation on the report, the Defense Minister said, but it seemed credible the American Jihadi was wounded in battle and later died.

Till today, no word of Hammami´s death has reached the Jihadi forums – not even the Somali-language ones. Although Al-Shabaab did not announce the death of its American or just in general foreign fighters with a huge eulogy posting on the forums or a video release, it is very likely the organization will celebrate the martyrdom of its most prominent Western recruit, if Hammami was indeed killed.

A number of American Al-Shabaab fighters died in recent years fighting in Somalia. At least six young men from the Minneapolis region were killed in battle with African Union troops, most of them were American-Somalis, second-generation immigrants and natural-born US citizens. They all had traveled to civil war torn Somalia without informing their parents and joined with Al-Shabaab.

If Omar Hammami did die recently he is the second White American to be killed in Somalia. Troy Matthew Kastigar from Minnesota, a HipHop loving, tattooed former criminal, had converted to Islam and made the journey to Somalia in November 2008. When he arrived in Kenya he contacted his parents for the last time, saying he is now moving into Somalia.

Early September 2007, Kastigar´s family back in the US confirmed media reports that Troy had been killed by Somali government troops in clashes with the Islamists of Al-Shabaab.