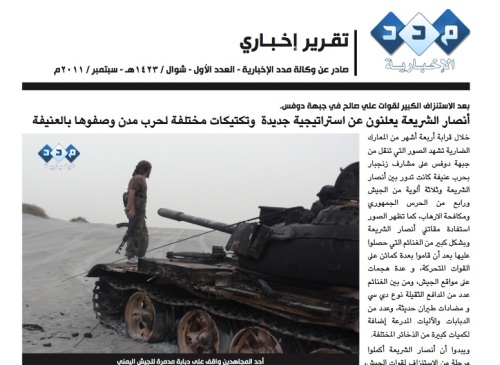 Last year Al-Qaida in the Arabian Peninsula (AQAP) announced it would create an army to establish the Caliphate of Southern Yemen and thereby fullfill the Prophet Muhammad´s Hadith in which he claims „An army of twelve-thousand will come out of Aden-Abyan. They will give victory to Allah and His messenger; they are the best between myself and them“.

Today there is a de-facto Al-Qaida state emerging in the southern parts of Yemen. In May Al-Qaida fighters attacked and occupied the town of Zinjibar, capital of the Abyan province. They forced the Yemeni military forces out of the city and distributed leaflets claiming Zinjibar is now part of a Caliphate in which Shariah law will be implemented. AQAP named it´s southern elements „Ansar ul-Shariah“ and over the last months managed to expand its reach into other cities in southern Yemen.

Recently „Ansar ul-Shariah“ released its first official newsletter titled „Madad News Agency – News Report # 1“. In a newspaper-like layout the Jihadi militants present an overview of recent events in the South Yemen Caliphate. Amongst other articles there is a statement denying Western media reports of the death of AQAP Amir Nasser al-Wuhayshi aka „Abu Basir“. The newspaper also claims 230 Yemeni soldiers were killed by AQAP in the past three months in the region from Zinjibar to Aden. According to AQAP the militants obtained numerous heavy weapons including tanks as „war booty“.

One article of „Madad News Agency“ claims responsibility for a suicide bombing against the Shiite Houthi rebels in the North of Yemen. A suicide bomber named „Abu Khattab al-Hawti“ allegedly carried out the attack and killed more than 100 Houthis.

A picture published in the Jihadi newsletter shows a group of young Yemenis sitting in front what appears to be a cinema watching an AQAP propaganda video during this years „Eid ul-Fitr“ Festival. 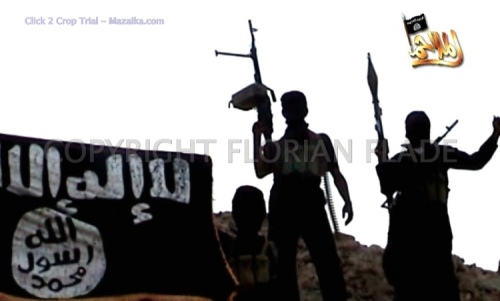 A prominent Jihadi Online Forum announced it on Friday with an unofficial post linked to Al-Qaida in the Arabian Peninsula (AQAP) – Al-Qaida fighters have taken control over the South Yemeni city of Zinjibar the statement said without giving any details – „The Mujahidin are patrolling the streets“.

Over the course of the weekend, this report was confirmed by mainstream media, including CNN and Reuters. The media outlets quoted residents of Zinjibar, the capital of Yemen´s Abyan Province as saying „hundreds of militants“ came into the city on Friday and occupied the town. Masked Islamists „suddenly arrived and in large numbers. There were no clashes when they arrived on Friday night. We tried to complain to security forces but could not find them“, one Zinjibar resident told CNN.

Yemen´s government confirmed that about 200 al-Qaida men took over control in Zinjibar on the weekend. According to government officials, the Yemeni military is meanwhile involved in heavy fighting in the town, up to a dozen Yemeni soldiers have been killed in the past two days.

Xinhua News Agency reports al-Qaida fighters read a statement to the residents of Zinjibar, declaring the town official being part of the „Islamic Emirate“. Al-Qaida militants attacked to police stations according to Xinhua and seized 30 police cars on Saturday.