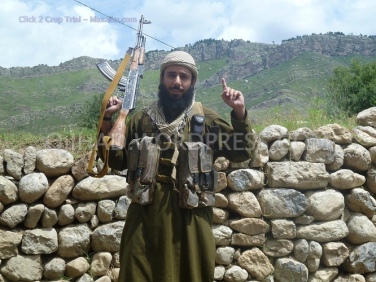 „The hero of Khorasan Zaid Saleh al-Hourani, known to everyone as Abu Musab al-Hourani“, the beginning of a short biography of a Jordanian Jihadist fighter killed in Afghanistan reads. The article about Al-Hourani was posted on Jihadist Internet forums recently and gives a rare insight into the situation of foreign fighters in Afghanistan these days.

„Abu Musab al-Hourani“, a resident of Amman, from a Jericho family, allegedly was a close aid to former Iraqi Al-Qaida leader Abu Musab az-Zarqawi and recruited about 30 other Jordanians to Jihad in Iraq. In Jordan al-Hourani was imprisoned for 5 years because of his terrorist activities.

In 2010 he traveled to Pakistan and joined the mujaheddin in the tribal areas. Pictures released with his biography are showing Abu Musab al-Hourani in the Pakistani tribal agency of Orakzai. „He took part in operations targeting the Pakistani military“, the biography reads. Al-Hourani was wounded during the fighting in Pakistan, both in battle with Pakistani troops (on his leg) and in CIA drone strikes (again his leg) but recovered from the injuries.

After two years as part of the Al-Qaida forces in Pakistan Abu Musab al-Hourani decided to wage Jihad in Afghanistan. In July 2012 he was killed during a US military raid in the province of Ghazni.

Even as drone strike are hitting Waziristan almost on a weekly basis, it seems like the media departments of various terrorist organizations in the region are still working. For example „Jundullah Studio“, the propaganda outlet of the „Islamic Movement of Uzbekistan“ (IMU).

Recently the group´s media wing has released a new video titled „The Martyr Zubayr at-Turki“ about a Turkish Jihadi militant who fought in the ranks of IMU.

The video is – as most of the latest ones by the IMU – of pretty good quality. It tells the story of „Zubayr at-Turki“ who migrated to Waziristan in 2008 and since then fought in numerous battles with the Pakistani military. He was killed recently and left behind his son „Abdullah“ who is also seen in the new video. The footage features several Jihadi militants including IMU´s emir Usman Odil, German Jihadi Yassin C. aka „Abu Ibrahim“ and some Turkish fighters. 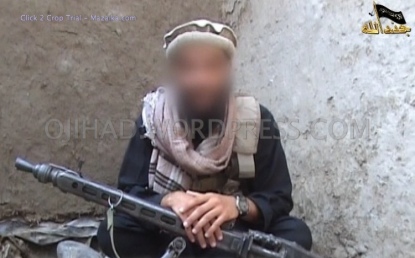 Samir H. – German Jihadi killed by US drone in March

On March 9 a US drone fired several missiles at a Pick-Up carrying about a dozen Taliban fighters and foreign militants near the village of Nishpa in South Waziristan. At least six suspected terrorits  were killed in the attack – among them 26-year-old German national Samir H. from Aachen. German newspaper SPIEGEL revealed the news of Samir´s death after it had been kept secret for weeks.

The Islamist, born and raised in East Germany, had traveled to Pakistan in October 2009 with his wife and two children, and joined the „Islamic Movement of Uzbekistan“ (IMU). In November 2009 Samir´s sister, at the age of 18, followed her older brother and made her way to the Waziristan tribal region.

Samir H., son of a Tunisian father and a German mother, is the second German citizen killed by a US drone strike within two years. Bünyamin E., a 20-year old from the city of Wuppertal, died in a similar attack in October 2010. His death caused German politicians as well as lawyers to protest the US policy of drone strike in Pakistan.