North of the Somali capital Mogadishu, the Islamists of Al-Shabaab recently executed two men in public. 38 year-old Abdullah Haji Mohammed was found guilty the Al-Shabaab Sharia court of spying for the Somali government. He allegedly was paid up to US-$ 120 per month for providing the „apostate government“, which Al-Shabaab is fighting, with information about the terrorist group.

The second victim of the Al-Shabaab crime punishment was Abdul Nasser Hussain, 26 years old, who was sentenced to death because of „multiple murders“ he confessed to.

Al-Shabaab fighters shot the two men in front of a large crowd and later released pictures of the public execution on the Internet. The killing took place as the Somali government claimed it had defeated Al-Shabaab in recent clashes in Mogadishu and is now in control of most parts of the city. Just outside of Mogadishu, Al-Shabaab´s Talibanesque rule is still in place. 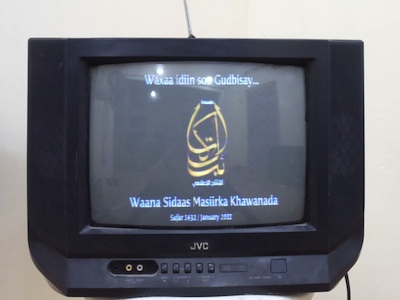 Twenty years have passed since the last Somali government collapsed and the country was then sucked into a bloody civil war between warlords, pirates, Islamists, foreign occupation forces and African Union Peacekeepers. Today large parts of the country are under the control of the Harakat Al-Shabaab Al-Mujahidin Movement – al-Qaida´s franchise in East Africa.

The „African Taliban“ of Al-Shabaab, along with their foreign Jihadi mercenaries, have implemented their hardline version of Shariah-law in many regions of Somalia. Step-by-step the Islamist movement is creating an Islamic State similar to the Afghanistan Emirate of the Taliban in the 1990s. Adulterers are stoned to death, public beheadings and floggings are taking place, movies, alcohol, music and even mobile phone ringtones are banned – women are ordered to wear the face-veil, men are not allowed to shave their beards under Al-Shabaab rule.

Al-Shabaab yesterday announced they are now operating their own TV news channel. „Al-Kataib News“ is now broadcasted in the capital Mogadishu. To celebrate the new propaganda channel, the Islamists aired a video confession of an alleged CIA-spy captured in North of Mogadishu and had allegedly been recruited by the US-intelligence agency in Djibouti in 2004. A statement released by Al-Shabaab claims the man was then publicly executed after confessing to have spied on the mujahidin.

The TV channel operated by the al-Qaida inspired Jihadi organization, is only the latest of many worrying developments in recent months. With the unification of Al-Shabaab and its former rival, the less-radical Hizb Islami group, only a few weeks ago, Somalia is on it a rapid way to become a Taliban-style Islamic State. 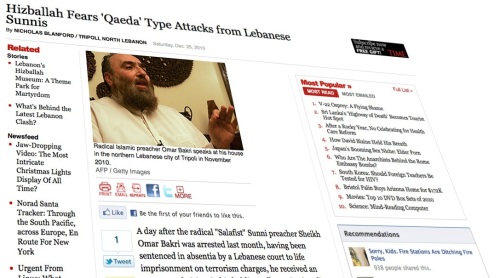 Why is Lebanese Shiite movement Hizbollah helping a radical Salafi extremist preacher sentenced to life in prison? What is the reason for a al-Qaida admiring, former anti-Shiite cleric Omar Bakri Muhammad to call to „bring Sunnis and Shiites together on certain issues“? In Lebanon the fear of a civil war, driven by al-Qaida´s Anti-Shiism agenda, is rising. Hizbollah observes an increase in hostile propaganda and activities within Lebanon´s Sunni community.

Salafi leaders accuse Hizbollah of threatening the change the face of the country, of acting arrogant and seeing Sunnis as an obstacle to execute their Iranian supported program. On a political level, Hizbollah´s power is seen as a danger to the security of Lebanese Sunnis. Several hardline factions such as the terrorist group „Abdullah al-Azzam Brigade“ are working to steer up hatred and violence between the two Muslim sects. An hour-long Anti-Shiite propaganda video was produced, titled „The Oppressed Sect“ (meaning the Sunnis in Lebanon).